K-Pop You May Have Missed: Jinusean

I’ve been meaning to get around to this latest post since it won in a Twitter poll in 2019, but life happened and I just plain forgot. Jinusean was one of the early hip hop acts I got turned on to back in 1999 and while I enjoyed a lot of their stuff in the beginning, it was mostly a few songs per album. Then they released their 3rd Korean album, and cemented themselves as one of my all time favorites. So now that I have more of a music only focus on the blog, it is finally time to jump in to one of YG Entertainment’s classic hip hop duos.

Jinusean’s debut album dropped before I had found my way in to the K-Pop fan scene, so this was an album I checked out after the fact. It’s interesting to go back and listen to the older Korean hip hop albums like this. Their first single was “Gasoline”, but didn’t really take off until their second single, 말해줘 (Tell Me) featuring Uhm Jung Hwa dropped. It was a more uptempo song than “Gasoline”. Other notable tracks are “Jinusean Bomb”, “Young Nation”, and “서로”.

Honestly this is kind of a weird album for Jinusean to drop, as The Real consists mostly of remixes and English versions of songs from the first album. It is probably my least favorite album in Jinusean’s catalogue, but there are some good tracks to find mixed within like the lead single, “What You Wanna Do” featuring MF Family. Other notable tracks are “Throw Them Hands Up”, and “이제 더 이상” featuring 1TYM.

Jinusean’s proper second album is Taekwon V, which is also the name of the lead single. For those unaware, Taekwon V was a Korean animated film series featuring a giant robot, which is also featured in the music video. Overall a fun track, but nowhere near my favorite from the album. That honor goes to the track “How Deep Is Your Love”, which was stuck in my head forever when I first heard it. Other notable tracks are “Return of the Bomb” featuring Perry & Legacy, “자유”, and “자나깨나”.

Now for Jinusean’s third album, this was their peak for me. This album from start to finish is still one of the best Korean hip hop albums to date. The album is full of catchy hooks and features, but most notably are the features by Prodigy of Mobb Deep, B-Real of Cypress Hill, Chino XL, and M-Flo. They went all out on this album, and it truly paid off. The lead single was A-Yo, and anytime that song comes on randomly in the car, I’m still turning it up and terribly rapping along. It’s going to be tough to pair down the other notable tracks, but they are “Holdin’ Down” featuring Prodigy, “Real Wunz” featuring B-Real, “Hip Hop Seoul” featuring Chino XL, “Ooh Boy” featuring J, and “Follow Me” featuring M-Flo.

After such an amazing third album, I was ready for the fourth so badly when I heard it was coming out. Let’s Play is a very good album, and I knew I shouldn’t have expected it to live up to the previous album, but I couldn’t help but be let down. It felt like them trying to recapture the same magic, but it just never found its own soul and instead felt like an album filled with tracks that didn’t make it to the last album. Even the features of Snoop and Warren G on “2 ALL MY PEOPLE” fell flat, and the lead single of “전화번호” as well. Sadly it would be their final album. Other notable tracks are “Micro Phone” featuring Teddy, Danny, “Well Come” featuring Lexy, and “Good Time” featuring Wheesung.

Jinusean would go over a decade, 11 years to be exact, before they would return to the music scene. And they returned with a pure jam in “Tell Me One More Time”, that had many cameos throughout the music video. This had me hyped for a new possible album, but nothing materialized in a possible full on return.

A single from the Korean hip hop reality show, Show Me The Money 4, Jinusean collaborated with Incredivle and Tablo for this song. It’s okay for a one time listen, but you aren’t missing out if you decide to skip it.

As with previous posts, below is all the merchandise (nothing but CD albums in this case) that I own of Jinusean. 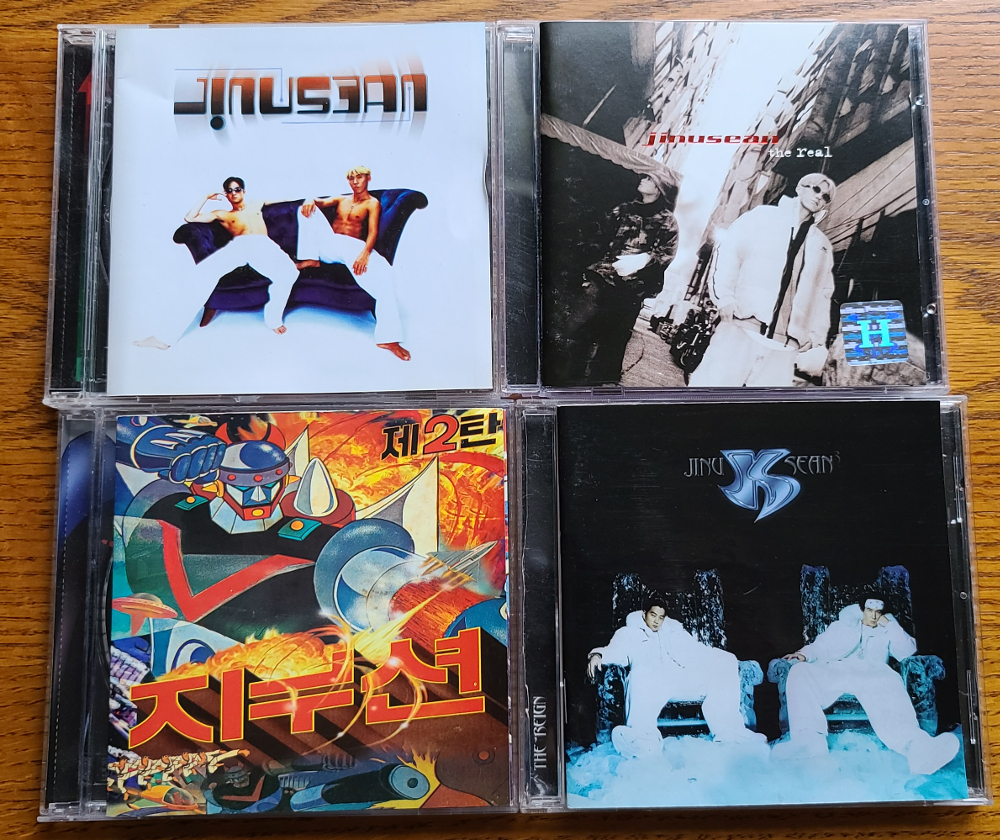