K-Pop You May Have Missed: S#arp

It’s time to bring about a mixed gender group from the 2000s that had some major hits, and lasted a handful of albums, but not without controversy. The group in question is S#arp, which initially consisted of the five members Lee Jihye, Seo Jiyoung, Jang Seokhyun, John Kim and Oh Heejong. After the first album, S#arp saw HeeJong and John leave the group and introduced two new members in Chris and Sori for the second album. Sori was just as short-lived, and the group continued with the remaining four members for their remaining albums. JiYoung and JiHye both had solo careers of varying lengths with JiHye still putting out music just this year.

The controversy previously mentioned came when a bullying scandal erupted between JiHye and JiYoung with allegations of verbal and physical abuse, which ended up disbanding the group. I won’t go further into details in this post as that isn’t my focus here, but the stories are out there if you want to learn more about it. Regardless of member changes and the bullying scandal, the group made some great music during their run. They were one of the few super popular mixed groups in a time that all female and all male groups were dominating.

Just to prepare folks for S#arp’s rapping style, especially early in their career, this was a period where rapping was just talking fast and without any really rhyming to them.

Their first album was in my opinion their weakest, but still a very solid album with some really fun tracks. Their two singles were “Yes” and “Lying”, with the latter being my particular favorite. Other notable tracks are “美”, “눈물”, and “Unchained Melody”.

This second album featured some of my favorite songs S#arp ever released . The lead single of “Tell Me Tell Me” would see the group in futuristic outfits in a very high energy music video, while their second single of “가까이” features the group in a more relaxed, late fall, early winter atmosphere. Other notable tracks are “For You”, “아껴둔 사랑 (Gimme! Gimme! Gimme!)”, “버드나무 이야기”, and “Forever With You”.

Like many groups after their first two or three albums, it was time for S#arp to step up to a more mature image. When they first released the music video for “잘됐어!!!”, they showcased a more mature and sexy side in the video. The sound was also more mature and followed the similar dance sounds that other acts were proving to be successful with at the time. “그래도 될까?” was their second single and a more relaxed pop song, which mixed a cute pop vibe with more mature sounding vocals. Other notable tracks are “모르니?”, “Liar”, “Dancing Queen”, “오해”, and “How?”

S#arp returned with their fourth album a year later, with their first single “Sweety”. This track is upbeat pop sound, instead of a harder dance beat, and super cute. They still made sure to deliver that dance sound with their second single of “백일기도”, which didn’t really stand up well as a single. Other notable tracks are “별 하나 사랑 둘”, “Yesterday”, “잊어도 되나요”, “Easy Come Easy Go”, and “이제”.

Like many other groups, S#arp eventually released their special album numbered as 4.5. This was their last album to see proper promotion as well, kicking off with the slow love song titled “내 입술… 따뜻한 커피처럼 (My Lips… Warm Like Coffee)”. Their second single “Kiss Me” was a cute pop and a video that showcased the group behind the scenes and having fun. Other notable tracks are “사랑할께”, “송인”, “All For You”, and “Bye Bye”.

Their fifth and sadly final album would see all promotions cut short by the bullying scandal I mentioned in the opening of this article. While the lead single of the album “눈물” was one of their best dance songs to date, it would never be showcased in a music video, and was short lived on weekly music shows. Even as the the scandal ultimately disbanding the group, I have to point out this album is their best work as a group. Other notable tracks are “유혹(4 Play)”, “싫어요”, “Magic”, “Coffee Love”, and “그랬죠”.

Three years after S#arp disbanded, JiYoung came back as a solo artist with a great first album. Her lead single “Stay In Me” is a classic not to be missed. Other notable tracks are “Sweet Love”, “몸살”, “Afu (자리비움)”, “안녕 내 사랑”, and “아침”.

Two years later Seo Ji Young would come back with her second solo effort, which would ultimately be her last. The lead song of “Hey Boy” was an okay pop track, and that sums up the album pretty well. It isn’t bad, but it just didn’t really stand out. Other notable tracks are “걱정말아요”, “한 걸음만”, and “다른 사람”.

JiHye would also release her first solo album in 2005 with two singles. One would be the upbeat pop track of “사랑이 오네요”, while the other was the ballad titled “그대없이 난”. Her solo effort was a solid debut, but one I personally found forgettable. Other notable tracks are “꿈”, “내 입술…따뜻한 커피처럼”, and “Missing You”.

S#arp and Seo JiYoung albums I own 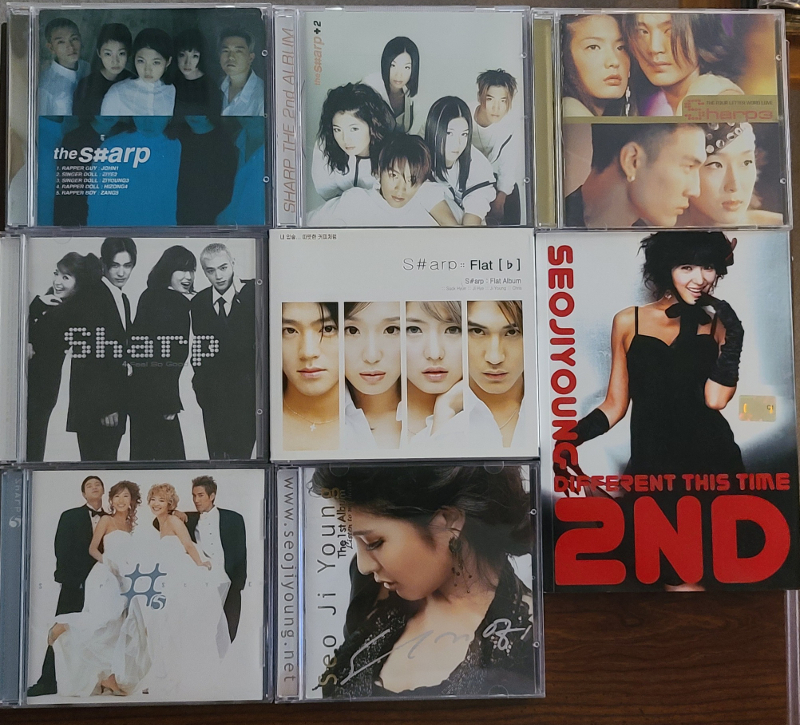