K-Pop You May Have Missed: Fin.K.L

My first ever K-Pop You May Have Missed was of the classic girl group S.E.S, but now it’s time to look at the 4 member group, Fin.K.L, who were S.E.S main “competition” back in the day. I put that word in quotes because they weren’t like heated rivals or anything per se, but you definitely had fans who were diehard about one or the other. Fin.K.L is a group I loved when I first started finding more K-Pop acts, and the one member of the group, Lee Hyori, is still my ultimate bias in K-Pop. The other three members of the group are Ock Joo Hyun, Lee Jin, and Sung Yuri. The group stopped performing together in 2005, yet never officially disbanded, and each member had successful careers in various mediums. To everyone’s surprise in 2019, they reunited for a variety show titled Camping Club, and dropped their “Fin.K.L Best Album”. They also released a brand new song for the first time in 14 years.

The lead single shared the same name of the album, and “Blue Rain” is a much more chill pop song than what other groups were performing at the time. Their second single, “To My Boyfriend” was more conformed to the mainstream. Their third promoted single was “Ruby (Sad Tears) and personally one of the top 3 Fin.K.L songs. Other notable tracks: “Scent of Love”, “Shadow”, and “Temptation”.

With the release of their second album, their title track was “영원한 사랑”, but it was their second single of “Pride” that remains as my favorite Fin.K.L song to date. The video is a great watch too. Other notable tracks are “Waiting For You”, “Oh! Boy”, “Kiss Me? Alright” and “서랍속의 동화”.

As was normal in K-Pop back in the day with special releases, albums in between normal releases would receive a half or a .5. S.P.E.C.I.A.L was Fin.K.L’s 2.5 album, and was a Winter themed record. The two songs performed from this album were “To My Prince” and “White”. Other notable tracks are “Blind Love”, “To My Friend”, “Like an Indian Doll”, and “Poisoning”.

FIn.K.L’s third album was similar to many other groups as they phased out of cutesy to a more mature theme. Their lead single “Now” was a more uptempo song, and had a more Western influence than anything prior. They also had a second single titled, “Feel Your Love”, but it didn’t generate much buzz. Other notable tracks are “Eternal Love”, “Pure Love”, “One Fine Day”, and “첫키스”.

Fin.K.L’s final album would feature the title track of “Forever”, and a second fan voted single of “Don’t Go Away”. Other notable tracks are “Change”, “Never”, and “One More Time”.

Fin.K.L’s return to music with all four members was a very relaxing melodic ballad style song, that was released alongside their Camping Club variety show.

Hyori’s first album was filled with Western style pop songs, and her lead single “10 Minutes” was a smash hit. The video is very reminiscent of J.Lo. Other notable tracks are “Do Me”, “One Two Three N’Four”, and “Remember Me”.

Hyori’s second album was met with controversy due to her title track of “Get Ya!” sounding very much like Britney Spears’ single “Do Something”. This album for me was a very mixed bag, and some of the song choices made it feel like the producers weren’t up to task. Other notable tracks are “Straight Up”, and “Dark Angel”.

The third album would feature another great hit by Hyori, titled “U Go Girl”, a song much about female empowerment and being yourself. Other notable tracks are the second single “Hey Mr. Big”, “My Life”, “Red Car”, and “Don’t Cry”.

Her 4th album released in 2010 with a single titled “Swing”, but her big hit from the album was “Chitty Chitty Bang Bang”. This album was Hyori’s second one mired with controversy, and pretty much all due to one producer, Bahnus. Seven songs from him were accused of plagiarism, and Hyori owned up to it and ceased all promotions. Other notable tracks are “Want Me Back”, “Scandal”, and “Get 2 Know”.

Hyori decided to maintain control over her 5th studio album, and wrote half of the songs for her album and incorporated a band instead of the normal production most pop songs use. Her lead single “Bad Girls” was yet another major hit for her. “Miss Korea” was another single from the album that approached the topic of women compared to Miss Korea, and most notable in the video were plastic surgery references. Other notable tracks are “I Hate Myself”, “Trust Me”, “Special”, and “Crazy”.

The 6th studio is a super interesting one. Hyori came back with a very mature sound, that really helped express the music in a much more impactful and personal way. She released two singles, “Black” and “Seoul”. Other notable tracks are “Rain Down”, “Mute”, and “Diamond”.

Ock Joo Hyun was always the most powerful voice of Fin.K.L and so when her first album released, fans weren’t disappointed. The lead single “Nan” was an instant hit. Other notable tracks are “A Day”, “It’s Okay”, and “I’ll Be Happy”.

Joo Hyun second album arrived with a brand new look for her. She lost a significant amount of weight thanks to intense yoga training (something she would promote her own brand of later). Her two singles for this album were “Catch” and “Sweet Rainyday”. Other notable tracks are “우린 춤을 추고 있어요”, “미안해요”, and “짝사랑”.

After debuting in theater, it was four years before her third album released with an R&B style track titled “Honey”.  Other notable tracks are “거짓말이야”, “마침내 우리”, and “헤어지세요”.

Joo Hyun returned to theater and began teach yoga at a college, and it would be a five year hiatus before a four track EP, Reflection, would be released. This time the lead single was titled “I Don’t Cry”. Other notable tracks are “Daddy’s Pillow” and “Shadow’s Play”.

My Fin.K.L swag. Out of any group or artist, I definitely own the most stuff from Fin.K.L, including VHS tapes, DVDs, and photo albums. 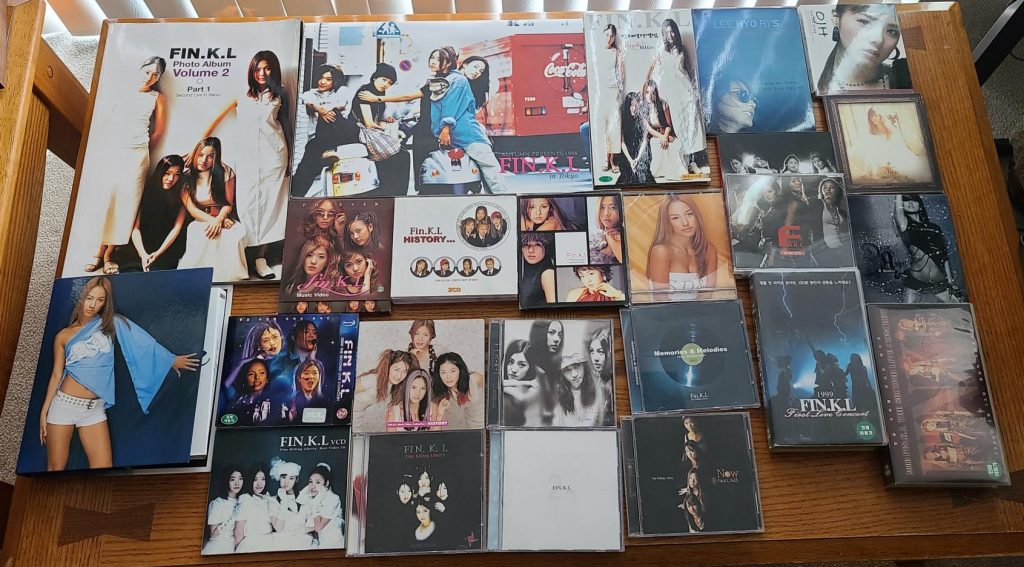