One of my all time favorite singers has to be J (제이 in Korean or J.ae later in her career. I’ll stick with J in this post, as it is what I’ve always known her stage name as). She wowed me in my early days of traversing through the fandom and I won’t forget hearing that second album for the first time. Her voice stood out, and I became hooked. I still listen to her albums pretty consistently even now. She grew up in the U.S., and even pretty close to me in the DC Metro area, albeit a different state of that region. Per Wikipedia: J grew up in San Francisco, California, and later Springfield, Virginia, where she attended West Springfield High School. She was discovered when she won the local title in a regional Miss Korea beauty pageant in Washington, D.C. She mostly did R&B, Uptempo R&B/Pop, and ballad songs, and her voice was always pretty unique. I don’t think I’ve heard anyone else like her, especially in K-Pop.

The bulk of her music career in terms of releasing albums was from 1998 through 2007. From there she did release some EPs, and even a seventh album in 2011. She also hosted a show called “The Sensation” on Aririang TV that I was able to watch when I had access to that channel back then. Post 2012, she released an EP and hasn’t returned to the music scene based on my research. While I hope she does one day, I can live with knowing Ailee recently covered my favorite song of hers “어제처럼 (Like Yesterday)” this year.

J’s debut is a bit odd as Blue and Gold are both considered her first album, albeit with slight differences. Each album had 13 songs, and all were the same except 4 per album. Some of the songs weren’t even in the same order. To be fair this was right before I got in to K-Pop, so I don’t really know the store behind this. I have seen some sites claim it is a double album, while others show it as separate. I sadly don’t own this album, so I am not completely sure. The feature release for these albums was “Goodbye” and honestly it’s a pretty basic K-Pop song from back then. The second song and video to come out was “너의향기”, which I think is way better and plays much better to J’s vocals. Other notable songs are “목소리를 위한 협주곡”, “애수”, “고백”, and “가리워진 사랑”.

J’s second album was the key to her successful career in my opinion. The single “어제처럼 (Like Yesterday)” is still probably her most well known song, and recently redone by singer Ailee. She also had two other releases with “831 8” and “Time Out”. To me it is still my favorite album over all as well. Start to finish, it’s too good to miss out on hearing. Other notable tracks are “나를 느껴봐”, “끝이 없는 욕심”, “Feel Me”, and “Breathe”.

Chocolate is J’s English album, which features English versions of her songs for the first two albums, and some new tracks. Her lone music video for the album was “Baby Tonight”. Other notable tracks from this album are “If I Could”, “You Are”, “Confession”, and “Concerto For Voice”.

On her third album, J returns with another fantastic album that is another one that can easily be enjoyed all the way through. Both of her featured singles (“빛” and “가장 슬픈 말” from this album are smooth R&B tracks, that grab me every time I hear them. Other notable tracks are “비밀”, “멀어지나요”, “Feed Me Full”, and “Erase The Days”.

By the time J’s 4th album dropped, she had really honed her style. So when the single for “그때까지”, you knew it was her immediately and she did not disappoint. Yet unlike her past albums, it would be the only promoted track from the album. Other notable songs are “함께 할수 있도록”, “Same”, and “사랑하기 때문에”.

Needless to say by the time J’s fifth album came out, I was stanning hard. Her lone single of “Sad But True” was another solid track, but probably one of my least favorite singles. Her voice is on point, but the production just felt like more of what everyone was doing, without rising above the rest. Honestly the album has much stronger standout tracks than the single they chose, so don’t skip based off that song alone. Other notable tracks are “그림의 Pie”, “누구도.. 무엇도…”, “고마워요”, and “괜찮을까요”.

In My Life is a Christian album released by J, and one I have not personally listened to. I didn’t even remember that it existed until I was gathering information for this spotlight. I was unable to find any music videos or specific releases for this album.

J’s official sixth album saw a single that was more true to form than her fourth. The single of “열흘만” is more of a mix of R&B and ballad, and the music video will hit you right in the feels like many Korean ballad videos do from the 90s and 2000s. Other notable tracks are “사랑, 눈물감기”, “Kiss Me”, “술과 순정” featuring Eun Ji Won, and “가는 비”.

Sentimental is a Special album released by J, and didn’t feature any singles. It’s a solid album overall, but not too impressive after a 3 year hiatus. Notable tracks are “No. 5” featuring Eun Ji Won, “사르르 (I Wanna Be Your Love)” featuring Jungyup, and “끝을 말할 순 없어도” featuring “장군”.

J would return in 2011 with her seventh and as of now, final full studio album. It featured a medium tempo single titled “Super Star” featuring the rapper Jiggy Dog. The album was a nice bounce back from her previous release. Other notable tracks are “Dream” featuring Supreme Team, “넌 나의 태양” featuring Juhan Lee, “Love Part 2”, and “행복한 사람”.

J’s final release would be an EP in 2012, and like her special album none of the songs received any real promotion. The title track of the same name “멋진 하루” was a quality track, but it didn’t seem to be enough to keep her career going. Other notable tracks are “둘이서” with Lee Jae Hoon, and “Young Forever (Love Part. 2)”.

J’s albums, compilations, and music video collections I own. 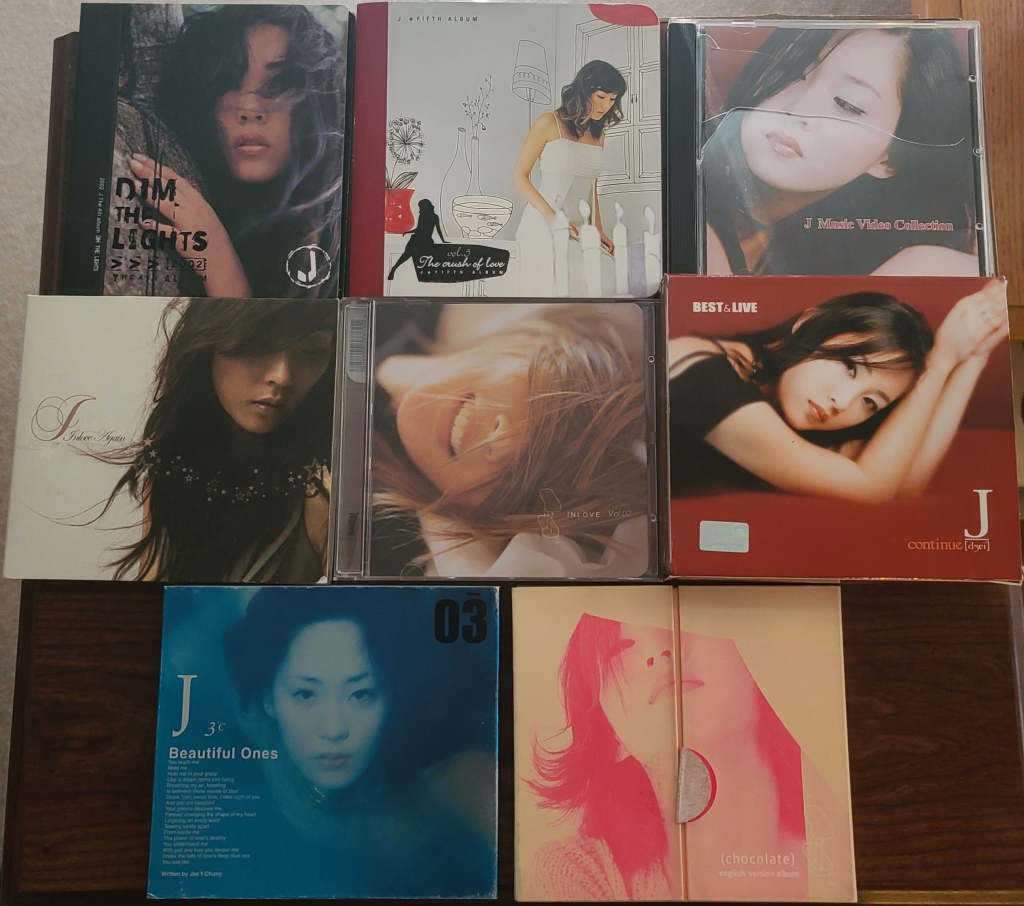