K-Pop You May Have Missed: Girl Groups Part 1

For this post I decided to look at past girl groups that only had 1 or 2 albums and sadly never made it bigger than I feel they should have. Some were just underappreciated, some were squandered after a bright start, and some just debuted at the wrong time. Thankfully I haven’t forgotten about them, and I want people to enjoy the music that I feel was overlooked or forgotten about. The five groups I will be focusing on for the first post about old school girl groups are AIDA, Nazca, Papaya, Shinvi, and SeeU.

AIDA (comprised of members Eunyoung, KKotbyul, and Yeojin) was honestly one of the first groups I came across that wasn’t super popular, and they brought in a very pop-rock sound with this album. Their first song, “클났어”, was this cutesy pop song with some rock elements and I found it interesting and different. While I looked for their album online to purchase, it was their second single that hooked me. “Crazy Love #1” was this song about love that was more of a darker sound for K-Pop, which was straight rock.  I was instantly in love. There’s also a bunch of hidden tracks at the end of the album that are really good. Another rarity for a girl group act at that time was the fact they played their own instruments. Other notable tracks are “Good-Bye”, “Crazy Love #2”, “Kiss Me”, “아시나요”.   **AIDA videos have to be watched ON YouTube’s website, so don’t be alarmed if they say Unavailable**

Reload was a 1.5 album, but honestly it was more of a repackage similar to what many groups do nowadays. It took all the songs from the first album and moved them around, including no longer hiding the last few tracks from the first album. The lead single and only new song was “Red”, and it’s a very fun pop-rock song that honestly made me think they’d be around for awhile. Sadly the group disbanded before a true second album could ever be produced. Skipping other notable tracks, as they are the same as the first. **AIDA videos have to be watched ON YouTube’s website, so don’t be alarmed if they say Unavailable**

Nazca was technically a six member group, but only five of them were actually real women. They were JungHee, JiYoun, Rei, MinKyung, and Oli. The 6th member was a virtual idol that shared the name with the group of Nazca. Their only single was “Bonaccia” did get featured in an iteration of the dance videogame series Pump It Up. It’s a house/dance track with a dark theme for their music video. I really loved this album from them, and they really showed a lot of potential, but alas nothing else ever came from them. Other notable tracks are “마녀들의 파티”, “Paradise”, 파란장미”, Only For You”.

One of my all-time favorite songs from 2000 was by five member girl group Papaya, who consisted of the ladies HyeKyung, YoonMi, YounJung, SeJung, and Kyung-A. This song was “내 얘길 들어봐 (Listen to my Word)”, and it was a catchy, tropical, dance song. It was even covered by OH MY GIRL in 2016. It’s a song you here and immediately thing of summer and the beach. The rest of the album pretty much follows the same vibe of upbeat poppy dance music. Other notable tracks are “탐”, “꼭 약속해”, “바람끼”, and “가면”.

After a successful first album, Papaya had two members leave the group that were not too popular in Kyung-A and YoonMi. The remaining three would try to keep up their popularity, but the album just wasn’t very good. While the cover made it look like you were in for more tropical dance pop, it was more par for the course in K-Pop at the time. This isn’t always a bad thing, but their songs just sounded more generic this time. Their lead single of “Violet” had a video that looked like it followed a “How to make a K-Pop MV” guidebook. All in all it was a disappointment and they disbanded shortly after. Other notable songs are “사랑만들기”, and “참” (Which sounds like a sequel to “Listen to my Word”).

Three member group See U (JiHye, JiNee, SuJi) was one of those trios I came across as I was fiending for more K-Pop. This was back when downloading a music video meant finding it via channels on IRC or Newsgroups, and it took hours for a single video. Their lead single “Love Story” was a par for the course pop song for the time, and it was really well done.  But it wasn’t until I came across their music video for their second single of “친구에서 연인으로” that I was hooked. It was a medium tempo, but extremely cute pop song. Even now when the song comes on, I just sit and watch without looking away. Other notable songs are “Love Story”, “마주보기”, “Forever Friend”, “미워! 미워!”

In 2002, S.E.S was close to the end of their run as one of the, if not the, premier K-Pop girl group. SM Entertainment looked to their subsidiary label, Cid.K Entertainment, and helped to promote a three girl group by the name of Shinvi. Shinvi’s members were  SooJin, Yuna, and Sang Eun. Their first single “To My Friend” honestly could have been originally an S.E.S song and I would have believed you. While that sounds like an insult, Shinvi pulled it off in my opinion. “Darling” was way more upbeat and cute pop as many other girl groups were doing. Another great song in my opinion, but the general K-Pop fan base didn’t share my sentiments. So the trio behind one of my all time favorite K-Pop albums, vanished sadly. Other notable song are “Starry Night” (Seriously this song is one of my all time favorites), “Violet…That’s Meaning”, “Just In Time”, “Princess in the Castle”, and “슬픈 선물”.

Below are all the CDs I own from the groups featured in this post, and I treasure them to this day. I especially am happy to own the AIDA as they are one of my all time favorite K-Pop groups that are easily forgotten and underappreciated. 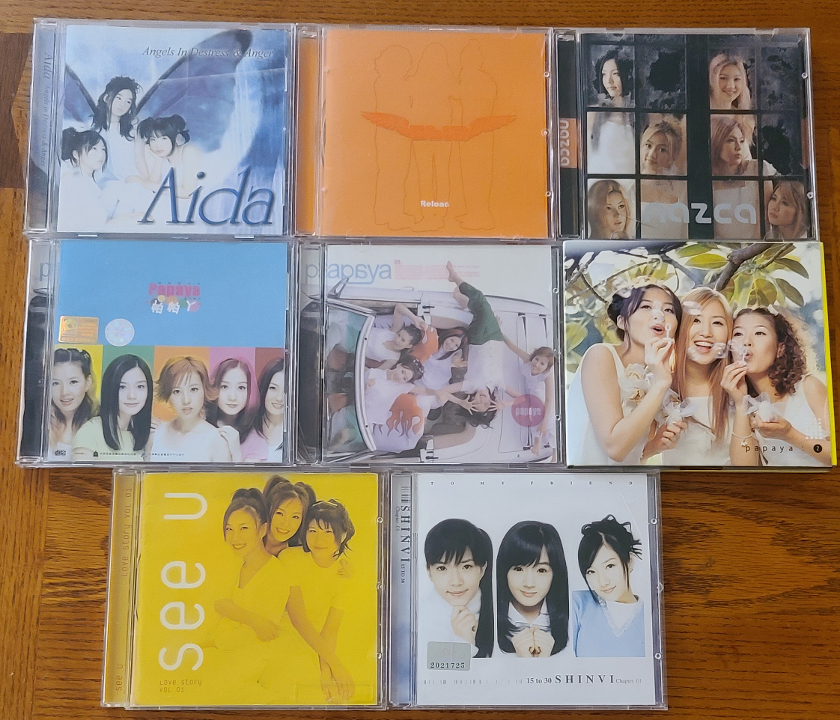